History of the Piccolo 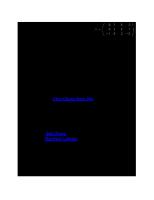 The History of Matrices

The history of matrices goes back to ancient times! But the term "matrix" was not applied to the concept until 1850. "Ma

The History of Scotland

history of the corset 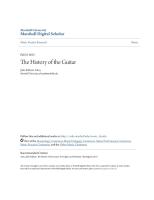 The History of the Guitar.pdf

History of the pianoforte

The History of Bioleaching

The History of Halloween

History of the Clarinet

Digitized by the Internet Archive in 2019 with funding from Kahle/Austin Foundation https://archive.org/details/history

THE HISTORY OF COMPUTER One of the earliest machines designed to assist people in calculations was the abacus which is still being used some 5000 years after its invention. In 1642 Blaise Pascal (a famous French mathematician) invented an adding machine based on mechanical gears in which numbers were represented by the cogs on the wheels. Englishman, Charles Babbage, invented in the 1830's a "Difference Engine" made out of brass and pewter rods and gears, and also designed a further device which he called an "Analytical Engine". His design contained the five key characteristics of modern computers:1. An input device 2. Storage for numbers waiting to be processed 3. A processor or number calculator 4. A unit to control the task and the sequence of its calculations 5. An output device Augusta Ada Byron (later Countess of Lovelace) was an associate of Babbage who has become known as the first computer programmer. An American, Herman Hollerith, developed (around 1890) the first electrically driven device. It utilised punched cards and metal rods which passed through the holes to close an electrical circuit and thus cause a counter to advance. This machine was able to complete the calculation of the 1890 U.S. census in 6 weeks compared with 7 1/2 years for the 1880 census which was manually counted. In 1936 Howard Aiken of Harvard University convinced Thomas Watson of IBM to invest $1 million in the development of an electromechanical version of Babbage's analytical engine. The Harvard Mark 1 was completed in 1944 and was 8 feet high and 55 feet long. At about the same time (the late 1930's) John Atanasoff of Iowa State University and his assistant Clifford Berry built the first digital computer that worked electronically, the ABC (Atanasoff-Berry Computer). This machine was basically a small calculator. In 1943, as part of the British war effort, a series of vacuum tube based computers (named Colossus) were developed to crack German secret codes. The Colossus Mark 2 series (pictured) consisted of 2400 vacuum tubes. John Mauchly and J. Presper Eckert of the University of Pennsylvania developed these ideas further by proposing a huge machine consisting of

18,000 vacuum tubes. ENIAC (Electronic Numerical Integrator And Computer) was born in 1946. It was a huge machine with a huge power requirement and two major disadvantages. Maintenance was extremely difficult as the tubes broke down regularly and had to be replaced, and also there was a big problem with overheating. The most important limitation, however, was that every time a new task needed to be performed the machine need to be rewired. In other words programming was carried out with a soldering iron. In the late 1940's John von Neumann (at the time a special consultant to the ENIAC team) developed the EDVAC (Electronic Discrete Variable Automatic Computer) which pioneered the "stored program concept". This allowed programs to be read into the computer and so gave birth to the age of general-purpose computers.

The Generations of Computers It used to be quite popular to refer to computers as belonging to one of several "generations" of computer. These generations are:The First Generation (1943-1958): This generation is often described as starting with the delivery of the first commercial computer to a business client. This happened in 1951 with the delivery of the UNIVAC to the US Bureau of the Census. This generation lasted until about the end of the 1950's (although some stayed in operation much longer than that). The main defining feature of the first generation of computers was that vacuum tubes were used as internal computer components. Vacuum tubes are generally about 5-10 centimeters in length and the large numbers of them required in computers resulted in huge and extremely expensive machines that often broke down (as tubes failed). The Second Generation (1959-1964): In the mid-1950's Bell Labs developed the transistor. Transistors were capable of performing many of the same tasks as vacuum tubes but were only a fraction of the size. The first transistor-based computer was produced in 1959. Transistors were not only smaller, enabling computer size to be reduced, but they were faster, more reliable and consumed less electricity. The other main improvement of this period was the development of computer languages. Assembler languages or symbolic languages allowed programmers to specify instructions in words (albeit very cryptic words) which were then translated into a form that the machines could understand (typically series of 0's and 1's: Binary code). Higher level languages also came into being during this period. Whereas assembler languages had a one-to-one correspondence between their symbols and actual machine functions, higher level language commands often represent complex sequences of machine codes. Two higher-

level languages developed during this period (Fortran and Cobol) are still in use today though in a much more developed form. The Third Generation (1965-1970): In 1965 the first integrated circuit (IC) was developed in which a complete circuit of hundreds of components were able to be placed on a single silicon chip 2 or 3 mm square. Computers using these IC's soon replaced transistor based machines. Again, one of the major advantages was size, with computers becoming more powerful and at the same time much smaller and cheaper. Computers thus became accessible to a much larger audience. An added advantage of smaller size is that electrical signals have much shorter distances to travel and so the speed of computers increased. The Fourth Generation (1971-present): The boundary between the third and fourth generations is not very clear-cut at all. Most of the developments since the mid 1960's can be seen as part of a continuum of gradual miniaturisation. In 1970 large-scale integration was achieved where the equivalent of thousands of integrated circuits were crammed onto a single silicon chip. This development again increased computer performance (especially reliability and speed) whilst reducing computer size and cost. Around this time the first complete general-purpose microprocessor became available on a single chip. In 1975 Very Large Scale Integration (VLSI) took the process one step further. Complete computer central processors could now be built into one chip. The microcomputer was born. Such chips are far more powerful than ENIAC and are only about 1cm square whilst ENIAC filled a large building. The Fifth Generation (the future): The "fifth generation" of computers were defined by the Japanese government in 1980 when they unveiled an optimistic ten-year plan to produce the next generation of computers. This was an interesting plan for two reasons. Firstly, it is not at all really clear what the fourth generation is, or even whether the third generation had finished yet. Secondly, it was an attempt to define a generation of computers before they had come into existence. The main requirements of the 5G machines was that they incorporate the features of Artificial Intelligence, Expert Systems, and Natural Language. The goal was to produce machines that are capable of performing tasks in similar ways to humans, are capable of learning, and are capable of interacting with humans in natural language and preferably using both speech input (speech recognition) and speech output (speech synthesis). Such goals are obviously of interest to linguists and speech scientists as natural language and speech processing are key components of the definition. As you may have guessed, this goal has not yet been fully realised, although significant progress has been made towards various aspects of these goals.