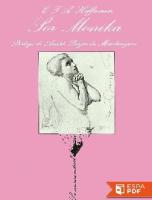 SUMMER WITH MONIKA by Jean-Luc Godard Translated by Tom Milne Originally published in French in Arts 680 (30 July 1958): 6. Published in English in Godard on Godard. ed. Tom Milne. (London: Secker & Warburg, 1972). The reissue of Summer With Monika on commercial release is the cinematographic event of the year. It is a homage to Ingmar Bergman by the Parisian cinemas. So one must hurry to the Pantheon just as one hurried to the Orangerie1 for Van Gogh a few years ago. The superb retrospective at the Cinemathèque Française and the fantastic success of Summer Interlude and The Seventh Seal probably had a good deal to do with this sudden Parisian craze for Bergman. But so it should be. Ignored when it was first shown on the boulevards, Summer With Monika is the most original film of the most original of directors. It is to the cinema today what Birth of a Nation is to the classical cinema. Just as Griffith influenced Eisenstein, Gance and Lang, so Summer With Monika, five years before its time, brought to a peak that renaissance in modern cinema whose high priests were Fellini in Italy, Aldrich in Hollywood, and (so we believed, wrongly perhaps) Vadim in France. Summer With Monika, in fact, already is Et Dieu...créa la femme, but brought off brilliantly, without a single flaw, without a single hesitation, with total lucidity in both dramatic and moral construction and in its development, in other words its mise en scène. Summer With Monika comes two years after Summer Interlude. But curiously, the adventures of Maj-Britt Nilsson might be a continuation of those of Harriet Andersson, which precede2 them in the Bergman chronology. Summer Interlude was the autumn, reveries on a solitary excursion, romantic as the Rousseau of the wonderful Confessions. Summer With Monika is summer, holidays on the cheap, sordid pessimism reminiscent of La Nausée. As I say, two years separate the films. But for Bergman, two years means two films, or twice the experience and ability. Admittedly, of all modern directors he alone has not openly rejected those devices beloved of avant-gardists of the thirties: superimpositions à la Delluc, reflections in the water à la Kirsanoff, back-lighting à la Epstein, that whole bric-à-brac of effects which one now finds only in the films of Gréville and Robert Hossein, or in amateur film festivals. But the use today of such outmoded tricks is audacity on Bergman's part. As used by the director of Summer With Monika, those mannered compositions, those bizarre angles, those shots of clouds, lakes, undergrowth, are not gratuitous camera tricks or technical virtuosity. On the contrary, Bergman always manages to integrate them into the psychology of his characters at the precise instant when he must evoke a precise feeling. Thus, for instance, a track out at dawn to express Monika's pleasure in her journey by boat through an awakening Stockholm; and later, the same tracking shot on the river and its embankments, but forwards this time as Monika returns, weary and disillusioned, to a sleeping Stockholm.

Bergman is the film-maker of the instant. His camera seeks only one thing: to seize the present moment at its most fugitive, and to delve deep into it so as to give it the quality of eternity. Hence the prime importance of the flashback, since the dramatic mainspring of each Bergman film is simply the hero's reflection on the moment and his situation at that moment. In Summer Interlude, the beautiful, tender summer became tragic. But in Summer With Monika, the pleasure is shot through with squalor from the start, the happiness with spleen. Monika and her lover, those modern Robinsons with only a sleeping-bag to harbour their love, soon turn their backs on joy to wallow in disgust. One must see Summer With Monika, if only for the extraordinary moment when Harriet Andersson, before making love with the man she has already thrown out once before, stares fixedly into the camera, her laughing eyes clouded with confusion, and calls on us to witness her disgust at involuntarily choosing hell instead of heaven. It is the saddest shot in the history of the cinema. 'Love at leisure, love unto death....'3 Summer With Monika is the first Baudelairean film. Only Bergman can film men as they are loved but hated by women, and women as they are hated but loved by men. And as for sensuality, Bergman would make the 'Série Blonde' look like pure spirituality if he were concerned only to evoke (thanks to the magic of the moving picture, as Louis Marcorelles4 would say) the quiver of a shoulder, the beating of a heart, the trembling of a knee. But there is something else. For Monika, like Michael O'Hara in Lady from Shanghai, it is a question of growing old gracefully. As old age, alas, means ugliness, it is lucky, Bergman murmurs, that the camera exists to preserve beauty. 1 "The Orangerie": A gallery in Paris (alongside the Jeu de Paume, the Expressionist museum), generally used for special exhibitions. 2 "precede": Evidently a slip of the pen for "follow." 3 "Love at leisure, love unto death": "Aimer à loisir, aimer à mourir." From the poem "L'Invitation au Voyage" in Baudelaire's Fleurs du Mal. 4 "Louis Marcorelles": A French critic, frequent contributor to Cahiers du Cinéma.