Geography assignment: “My Dream Vacation!” I have wanted to go for a vacation for very long. The country for my dream va 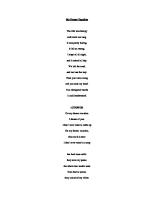 My Dream Vacation The ride was bumpy and much too long. It was pretty boring. It felt so wrong. I slept all all night, 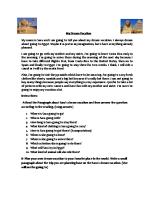 My Dream Vacation My name is Sara and I am going to tell you about my dream vacation. I always dream about going to Egyp

Geography assignment: “My Dream Vacation!” I have wanted to go for a vacation for very long. The country for my dream vacation is Australia. Australia is a part of the continent, Oceania. It is a big country with many attractions. I am going to share with you, in this essay, what attracts me such that I want to go to Australia.

There are many physical factors in Australia. One of them is deserts. I would like to go to a desert in Australia as there are many plants and animals at the deserts. I can also experience a bit of desert life and know more about deserts after going to one myself. Picture 1 is an image of the desert. Another physical factor is the rock formations. There are many rock formations in Australia that are formed naturally. These rock formations make a good place to watch sunrise and sunsets. I am sure we do not want to miss such a spectacle as it would be such a pity. Examples of such rock formations are Uluru, otherwise called Ayers Rock, which is a World Heritage Site, Kata Tjuta, also known as Mount Olga, and Devils Marbles. An image of it is Picture 2. The third physical factor is the ranges, which consists of mountains and hills. The ranges let us see a series of mountains together. Climbing one of the mountains is a good experience for me as I had not tried mountain climbing before. Since they are ranges, there must be nice scenery there too. I would like to go there to see the beautiful scenery. Examples are Brindabella Ranges, visible to the west of Canberra, and Flinders Ranges, the largest mountain range in South Australia. An image is Picture 3. The fourth physical factor is the reefs in Australia. The most well known reef in Australia is the Great Barrier Reef, Australia’s greatest gift from nature. It consists of a lot of marine life and consists of over 3000 individual reef system. I would not miss this chance to see the world’s largest reef if I were to go on a vacation to Australia. An image of it is Picture 4. The fifth physical factor, which is the last, is the rivers. The rivers provide a great place to relax for a vacation. There is marine life in the river so I can learn more about it if I go there. There is also nice scenery and an experience gained. In Singapore, the

rivers are covered at the side by railings and concrete so no such things can be seen. An example is Murray River. Picture 5 shows the picture of the river.

Here are the human factors in Australia which made me want to go there. One of them is the cities there. The cities there must be different from Singapore in terms of design. There are also different cultures there which are different from those in Singapore. There are also cities which are special, like Coober Pedy, which has its buildings underground. This makes my vacation unique and lets me experience different types of cities. The image is Picture A. The second factor is the farms. By going to the farms, I can learn more about the Australian way of life and know more about Australia through cultural exchange. The third factor is the mines. There are mines in Australia, which is not present in Singapore. An example is the Olympic Dam in South Australia and it produces a lot of metal, 9.1 million tonnes annually. Picture C is an image of it. The fourth factor is the harbours in Australia. There are not much harbours in Singapore and we might not see it often. The harbours in Singapore are also not so busy. The harbours in Australia, like the Gladstone Harbour, are very busy due to the large shipments of materials they allow. I can have a chance to see a busy harbor with the ships in and out loading and unloading goods repeatedly and frequently. This is not very easily seen in Singapore. An image of the harbor is in Picture D. The fifth factor is the roads in Australia. The roads in Australia are bound to have differences from Singapore, in terms of how the symbols are drawn and how the lanes are planned. I would like to go to Australia to see and identify the difference between their roads and our roads here in Singapore. I can also find out due to the difference in design, which way of building the road is more efficient or are they about the same. The image is in Picture E. I am interested to go to Australia for a vacation due to these reasons, and I hope that you will feel the same too. Who does not like beautiful sceneries? There are many nice types of scenery there and some of the examples of the factors are given. We can learn while having fun there so I hope you will choose Australia as a place for your next vacation.