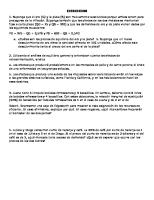 Q4 of 10 "They were living in Chicago when their son was born," she said.

Q5 of 10 "I have been to India three times," Melissa said.  She said that she has been to In

Q6 of 10 "We have been waiting for the tickets for three hours," they said.

w aiting for the tickets for three hours.

Q9 of 10 "You must drive slowly here," the police officer told me.

hat I should drive slow ly around here.

Escribe las siguientes frases en estilo indirecto, como en el ejemplo (He said he was happy.). Sample Construct Reported Speech: I am happy.  He said he w as ha He said that he w a

Q1 of 5 Construct Reported Speech: I am sleeping.  HE said that he w as sleeping.

Q4 of 5 Construct Reported Speech: I have been sleeping.  He said he w ould be happy.

Q5 of 5 Construct Reported Speech: I will have been happy.  He said he had been happy.

Change to reported speech: a) Mary said: «I’m fed up with my boyfriend» Mary said she was fed up with her boyfriend. b) Peter said: «Titanic is the best movie I’ve ever seen» Peter said that Titanic was the best movie he has ever seen. c) My aunt told me, «I am going to go to Barcelona tomorrow» My aunt told me she was going to Barcelona. d) The English teacher told us: «You should be able to pass the Advanced at the end of the year»

The English teacher told us that we should be able to pass the advanced at the end of the year e) Sarah told me: «I will give up smoking next week» Sarah told me she will give up smoking next week.  2) CHANGE THESE SENTENCES TO REPORTED SPEECH a) «I am working the night shift», Peter said. Peter said he was working the night shift. b) Sarah asked: «had you ever been to Paris before? » Sarah asked if we have ever been to Paris before. c) «I’m starving», Tom said. Tom said he was starving. d) «We have been waiting for you for thirty minutes», Mary complained. Mary complained that they had been waiting for me for thirty minutes e) «You must drive slowly here» the police officer told me. The police officer told me that I should drive slowly there. f) «I need to text my Mum in one hour», she said. She said she needed to text her Mum. g) «You must follow your teacher’s example», my father told me. My father told me that I should follow my teacher’s example. h) Linda said: «I bought a new computer last year ».  Linda said she bought her computer last year.

“He is going to open the front door”, I said.

I said he was going to open the front door

- Cambios en los pronombres personales sujeto y objeto - I don't know YOU - She said she didn't like ME - WE are late - He said THEY were late   - Cambios en los posesivos: - That's not MY book - He said that wasn't HIS book.   - Peticiones e imperativos en estilo indirecto: (not) to + infinitivo - "Shut up" - He asked me TO shut up. - "Don't open that window" - He ordered them NOT TO open that window.   - Preguntas en estilo indirecto:  - Al pasar de estilo directo a indirecto las preguntas tienen el orden SUJETO + VERBO. Hay que diferenciar entre dos tipos de preguntas:

* Preguntas con palabra interrogativa (what, who, where, etc): He asked: "Where are you?" - He asked me WHERE I was * Preguntas cuya respuesta es si o no (sin palabra interrogativa). She asked: are you OK? - She asked me IF/WHETHER I was OK.   - Sugerencias en estilo indirecto: Suggest + -ing   /    that should They suggested leaving early They suggested that we should live early